As you may have heard – then again, maybe you haven’t  – southern West Virginia had a chemical spill Thursday late afternoon.  The spill has affected the water supply for nine counties – no one has been cleared to use their water for anything other than flushing the toilet or fighting a fire since then.  And it looks like they’re going to be going another couple days.

For those that don’t know us or West Virginia that well, Direct Online Marketing is located in Wheeling in the Northern Panhandle.  The spill happened in Charleston, our state capital, located in Kanawha (pronounced kuh-NAW) County.  And while the different parts of the state – and these two cities especially – like to rib each other*, it’s a tight-knit state.  As the West Coast Rap All-Stars like to say, “We’re all in the same gang.” * Back when I was engaged to my now-wife, my future father-in-law was working in Kuwait.  He found out his foreman was from West Virginia so he informed her that his future son-in-law was as well.  Her eyes lit up and she asked which part of the state.  When he said “Wheeling,” her eyes dulled and she replied, “That’s not West Virginia.”

News of the spill started to spread around the state pretty quickly, primarily at least up here through social media.  I serve as an appointment by Governor Tomblin to the West Virginia Early Childhood Planning Task Force and it so happened we had a meeting in Charleston on Friday.  Katie Hinerman in our office sent me a text Thursday night with a great suggestion of taking down water on my trip.

Thinking about how I might be able to get more water down than my station wagon could hold, I called Chad Remp at Wheeling Truck Center to see if I could rent a truck.  I probably should have known what would happen next because they’re such good people, but Chad and his father Ron donated the use of a box truck, fuel, and money to buy water.  Not only was this act incredibly kind, but also reckless considering they know how lousy of a driver I am.  Somehow they were not phased by later texts like, “I didn’t know you could drive a box truck on 3 wheels” and “The speedometer only goes to 90, so I really have no idea how fast I’m going.”  If you would like to repay their kindness, consider buying a brand new Volvo reefer from them.  Or if that’s out of your budget, perhaps you would be interested in buying some truck parts?

I threw out a quick post on facebook telling folks I was going down and asking if folks up here wanted to chip in or if folks down there needed anything. Several individuals from Wheeling or with Wheeling ties offered to help.  I constantly feel blessed to be in such a giving community.

Update: some of the individuals that have helped include Debi Craze, Paul Daugherty of WV Grantmakers, Delegate Ryan Ferns of the Ryan Ferns HealthPlex, Summer Craze Fowler, and Julie and Brian Joseph of Touchstone Research Laboratory.  Others have explicitly asked to remain anonymous, and some I’m not sure if it’s okay to mention.  Will update with more names if and when I’m able.

Then I talked with my wife and we decided to ask my oldest daughter if she wanted to help out the people of Charleston.  (I couldn’t take either or both of the other two safely in the truck.)  She said yes, so we called the school to say she wouldn’t be attending Friday.  Shortly thereafter, my meeting was converted to a teleconference call, but the wheels were already in motion.  What father wouldn’t still head down, being lucky enough to spend the whole day with their daughter?

Here then is the story of our trip.

Picking Up the Water

Clare and I picked up the truck from Wheeling Truck Center.  We brought along some books and stuffed animals to keep us company.  As you can see, she was thrilled to be riding in a truck…and in the front seat!  (There was no passenger side air bag and we used a booster seat even though she technically isn’t required to use one.) We headed out to St. Clairsville, OH as it is on the way.  We picked up some hand sanitizer and bottles of water from one store that didn’t have any jugs, so then we headed over to Wal-Mart and just started clearing them out.  “We have a crate with more in the back – do you want those?”  “Yes.”  “How many?”  “Yes.”

We took everything they had – over 400 gallons – only stopping to let a man from Putnam County grab some for his family, friends, and neighbors.  And of course he helped us load up before he took off.  If you’re looking for water to take down, you should consider buying from the Wal-Mart in St. Clairsville: 740.695.8410.  They loaded up on ordering more water and the assistant store manager Robert Boles kindly offered to donate a few cases when he found out what we were doing.

Loading all the water in the back of the truck took awhile, but fortunately, I had a very special helper: Now loaded up, off we took.  Even though it was a long trip, you can see that I am a master conversationalist: Did I mention it was a really long trip? Finally we made it to Charleston.  First stop was meeting a friend with an infant to give him some water.  We met in a 7-11 parking lot.  I opened the back of the truck and started getting swarmed, but in a very polite way.  People were all very respectful and grateful.  After I closed the back, someone else came up and I told him I’d be happy to give him some water, but he needed to follow me to my next stop, a couple blocks away.  If I had stayed there, we would have given out the entire load within half an hour.

Next up was Manna Meal, which was suggested to me by Julie Pratt, a wonderful woman – and terrific facilitator / planner – I was fortunate to meet through our Task Force.  If you’re not familiar with Manna Meal, they serve up over 400 meals per day, 365 days per year. Tremendous operation.  They also recently lost all their heat – yes, right before that awful cold spell.  Their executive director Jean Simpson was nice enough to tell us about their operation and give us a tour: Next up, we over to the YWCA, where Clare got to push a shopping cart.  Apparently this was AWESOME! They explained to Clare their mission.  We talked about how sometimes bad things happen to people or they have bad luck and not everyone is fortunate enough to have a support network to help them out.

After the YWCA, we dropped off some water to the great-grandmother of one of Clare’s friends, who recently had a  stroke. Had a little confusion at first as apparently Clare’s friend’s dad and mom don’t have the same last name, but we worked it out.

Finally we headed out for the stop Clare was most excited for: the animal shelter, or more specifically, the Kanawha / Charleston Humane Association.  Clare stopped for a photo opp at their request: 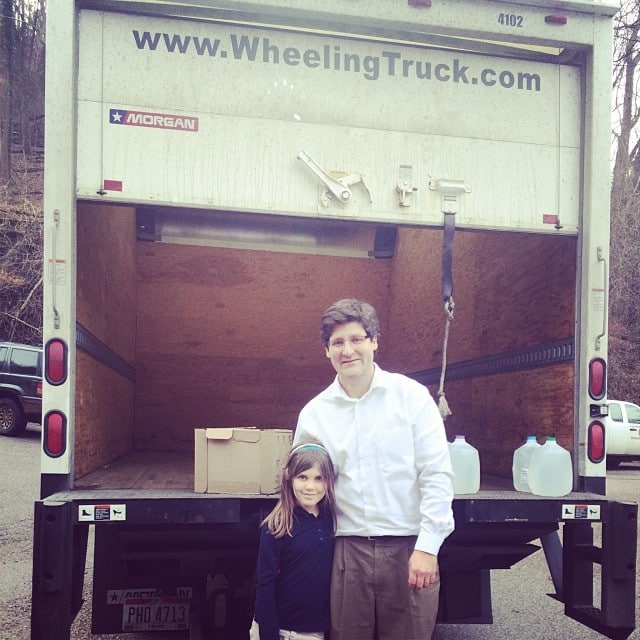 Since she had worked hard all day, she got to go visit the animals while we unloaded the last of the water.  Here she is with Lanette: If you want to follow along to what’s happening in southern West Virginia, I suggest you follow DOM friend (and fellow Northern Panhandler), Ann Ali of the State Journal.  Terrific reporter and asset to our state.  She has all the latest updates.

I’d suggest following along on social media if you’re interested in helping donate.  I’ve seen or heard several places all doing great work this morning.  Clare and I were just lucky to be one of the first ones able to help – even before FEMA, apparently:

@domjbs @directom PS I think your water supply may have gotten here even faster than the “official” shipments – thank YOU & Wheeling again!

From all of us at Direct Online Marketing, we’re wishing a speedy return to normalcy for all the people in Southern West Virginia, especially the ones who aren’t fortunate enough to be able to get out temporarily.  Thank you for letting us help – and giving me an excuse to spend an entire day with my daughter!