…because they’re offering interest targeting.  See what I did there?  I’ll give you a second to compose yourself.

There are three primary ways to advertise through twitter – through promoted tweets, promoted accounts, and promoted trends.

*In the US, anyway.  Some countries have lower costs.

Update: You can read the rest of this section to learn how things used to be, but twitter has now given full targeting and analytics features to advertisers using their Self Service accounts.

I want to make one important distinction to make about types of twitter accounts.  When twitter first started offering advertising to select brands, there was only the option for full accounts with all the bells and whistles.  To get one of these accounts, you need to do a contract with twitter and commit to at least $15,000 over three months.

Then later they started offering – to select advertisers – a stripped down platform with no minimums.  With both types of accounts, you have to be approved by twitter.  The wait on the small business accounts (unless they’ve reached out to you directly with an invitation) is currently being quoted as two weeks, which would be a little faster than it’s been historically.

The small business accounts are a great way to test to see if twitter ads can be helpful for you – and might be the only option your budget affords.  But, you don’t get all the same options, such as being able to create tweets specifically just for ads or placing ads in searches.  Nor do you get a range of really powerful analytics for your entire account.

And you don’t get the same targeting options, such as device targeting, targeting users like your followers, or – now – interest based targeting.

We heard about the news last week, but were embargoed until the new features launched, which twitter announced yesterday afternoon:

There are two flavors of interest targeting. For broader reach, you can target more than 350 interest categories, ranging from Education to Home and Garden to Investing to Soccer, as shown in the screenshot below. As an example, if you were promoting a new animated film about dogs, you could select Animation (under Movies and Television), Cartoons (under Hobbies and Interests), and Dogs (under Pets). 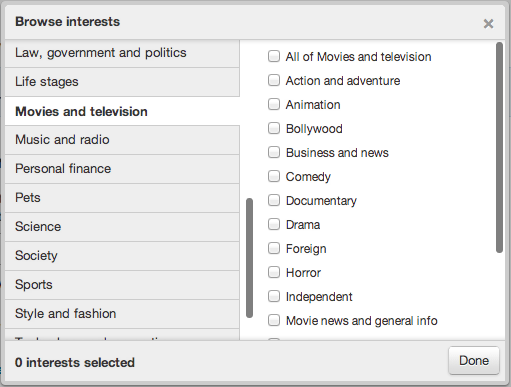 The two-level interest hierarchy is composed of more than 350 categories.

If you want to target more precise sets of users, you can create custom segments by specifying certain @usernames that are relevant to the product, event or initiative you are looking to promote. Custom segments let you reach users with similar interests to that @username’s followers; they do not let you specifically target the followers of that @username.

Emphasis is mine – it’s a key distinction that might get lost as you set up custom segments.

Have fun trying out the new interest targeting – would love to hear about your experiences.  And as always, we’re here to help.

Now put away your white clothing and enjoy an awesome end to your summer this Labor Day weekend.  Be safe and have fun.

Want To Join Them? 👇 Sign Up For Our Newsletter 👇